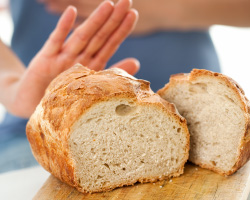 Sept. 12, 2022—For millions of Americans living with celiac disease, eating gluten (a protein found in wheat, barley and rye) can be a big problem. That's because celiac disease leads to damage of the small intestine when gluten is consumed.

Learning a few more facts about celiac disease—courtesy of the American Gastroenterological Association and the Celiac Disease Foundation—can help you understand its effects and treatments and whether you could have it.

2. Celiac disease can cause surprising (or no) symptoms. Many people with celiac disease have digestive symptoms, such as bloating, gas, stomach pain, diarrhea and constipation. But some people have signs and symptoms that don't involve the gastrointestinal (GI) tract. These may include tiredness, skin rashes, bone or joint pain, tingling or numb legs, and irritability in children.

Still other people with celiac disease don't have symptoms. They may have other health problems that lead to their diagnosis. But even when celiac disease doesn't cause symptoms, it can still harm your health, if left untreated.

3. You can be diagnosed with celiac disease at any age. Some people receive a celiac disease diagnosis when they're very young. But many people don't know they have it until much later, when they become adults. The condition can start at any age.

4. It runs in some families. Your chances of having celiac disease go up if a close relative has it too. A close relative means someone such as your mother, father, brother, sister or child.

5. Going gluten-free is the key to feeling better. If you have celiac disease, quitting gluten can help heal your intestine, and it often improves symptoms within weeks. But if you think you might have celiac disease, don't give up gluten just yet. First, your doctor may give you a blood test for celiac disease. The results of this will only be accurate if you're still eating gluten.

If you do have celiac disease? A dietitian can teach you how to avoid gluten and enjoy healthy foods, including some grains, such as quinoa. Wheat, barley and rye are major gluten sources. But gluten can also show up in surprising places, like in soy sauce, salad dressings and candies. It's even in some nonfood items, like medicines.

Separate fact from fiction by taking a quick quiz.